There are a few items that have persistently resided at the very top of my bucket list for sometime now. Hiking in New Zealand, attending fashion week in Paris, and taking in the sights and flavors of Tokyo.

The majestic capital of Japan with its blend of modern and traditional has always called to me. Loudly. From the incredible style that percolates on its streets, to the food, architecture, and culture, I’ve admittedly been an obsessed observer from afar for years. We have Anglophiles and Francophiles, but what do we call someone who is a lover of all things Japanese? A Japanophile, perhaps? Well, that has always been me.

Known as the “uni girl” here in Chicago, I’ve grown quite a reputation for someone who is both appreciative and knowledgeable about Japanese cuisine and history. But to have such a fondness for all things Japan while never stepping foot on Japanese soil, well, that just didn’t seem right. 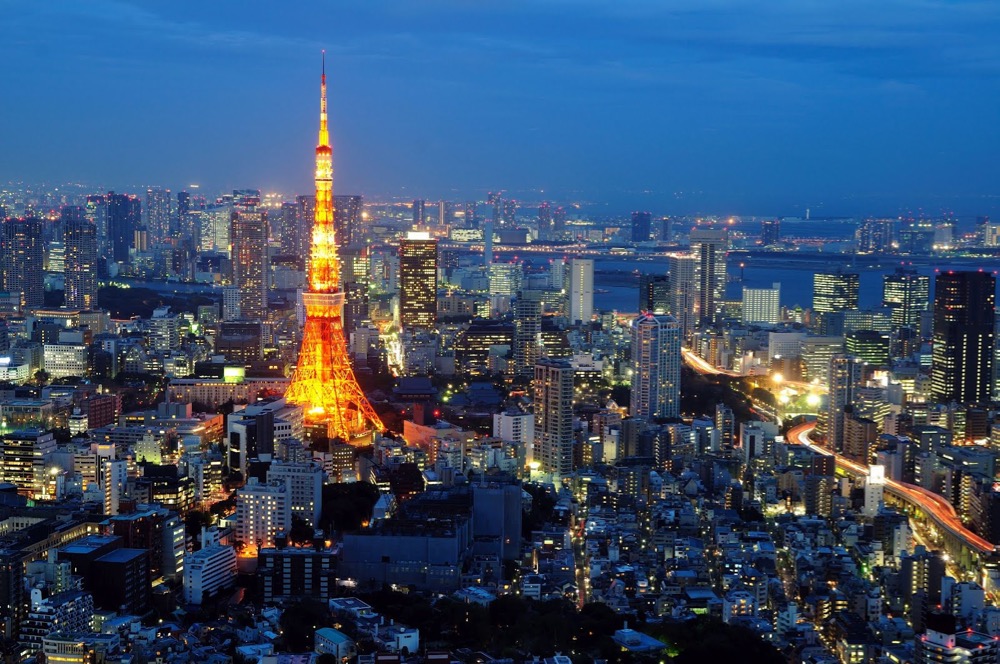 As if the heavens opened up from above, I was recently invited to travel to Tokyo with ANA, All Nippon Airways, to experience the launch of their new, non-stop service from JFK and Chicago direct to Haneda. In fact, I would get to experience the inaugural flight. How could I not jump at the opportunity?

Obviously, a ‘yes’ was not far behind and just like that, I was preparing for my first travel to Tokyo. 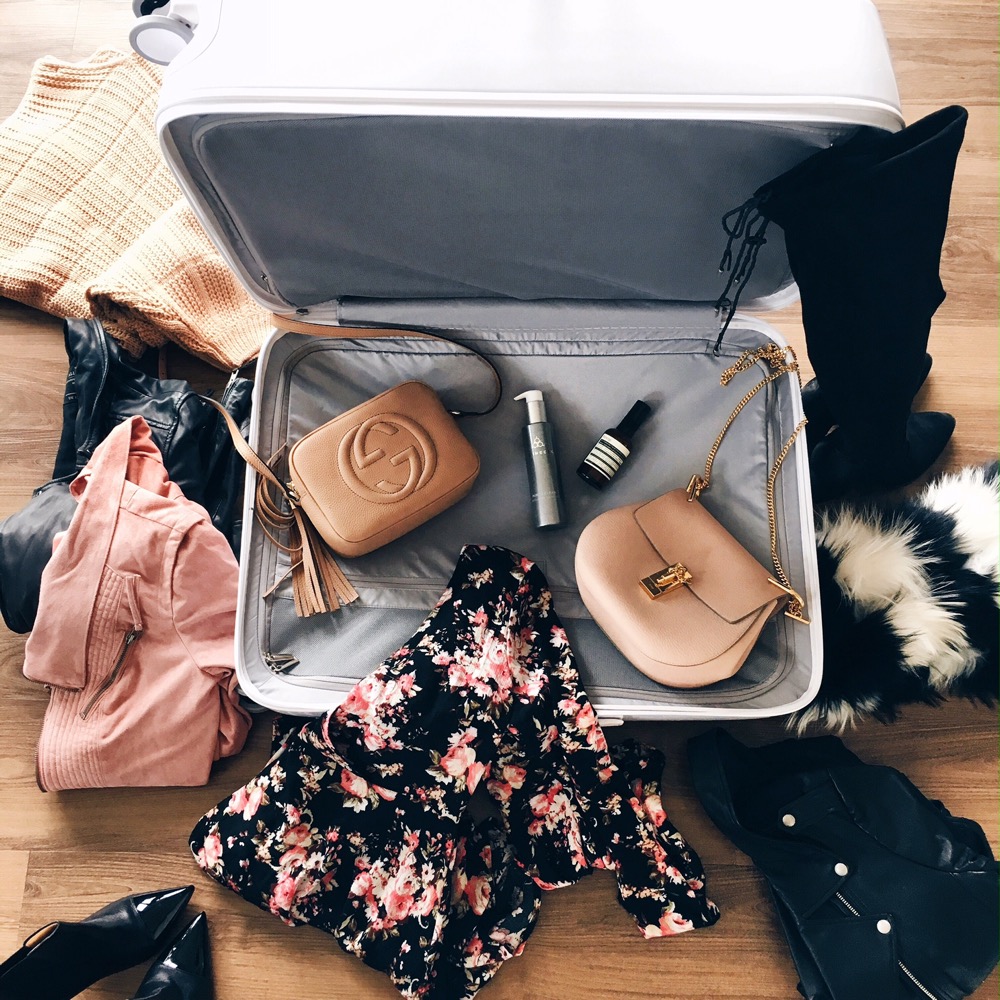 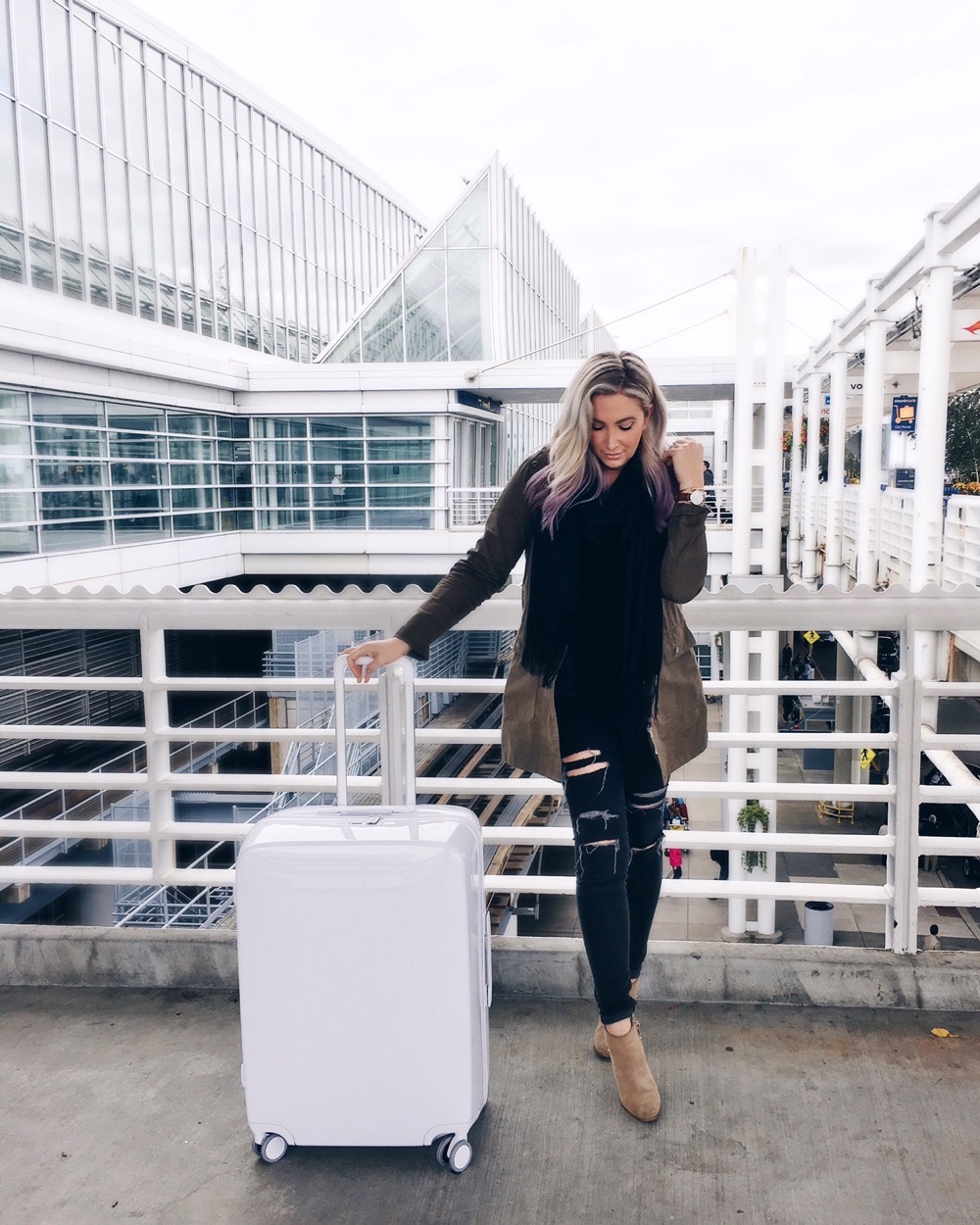 Arriving at O’Hare was quite the scene! There was substantial fanfare surrounding this inaugural flight. Upon arrival at our gate, we were greeted by balloons, performances from traditional Japanese musicians, a Shodo calligrapher exhibition, and a ribbon cutting. 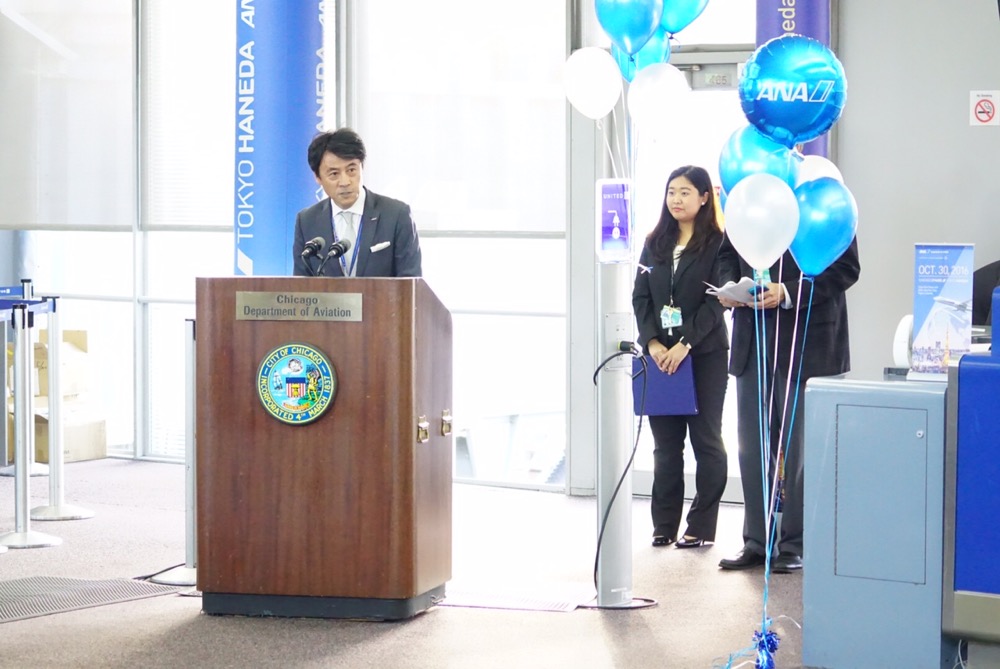 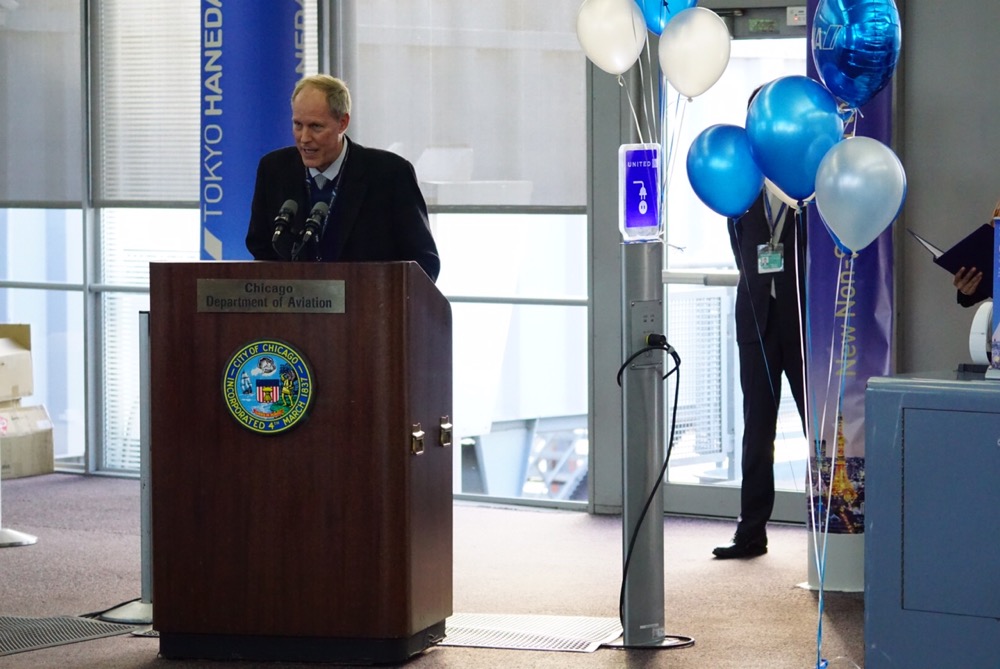 Kicking off the trip with panache, ANA was determined to not only make this trip feel special but to provide a healthy dose of the inspiration of Japan they’ve become so well known for. Tradition, hospitality, and thoughtful attention to detail are truly the cornerstones of this brand.

After the celebrations subsided, we were ready to board and settle into our business class accommodations on ANA’s 777. I’ll try not to rub it in too much, but you really can’t travel with much more style or class than this. 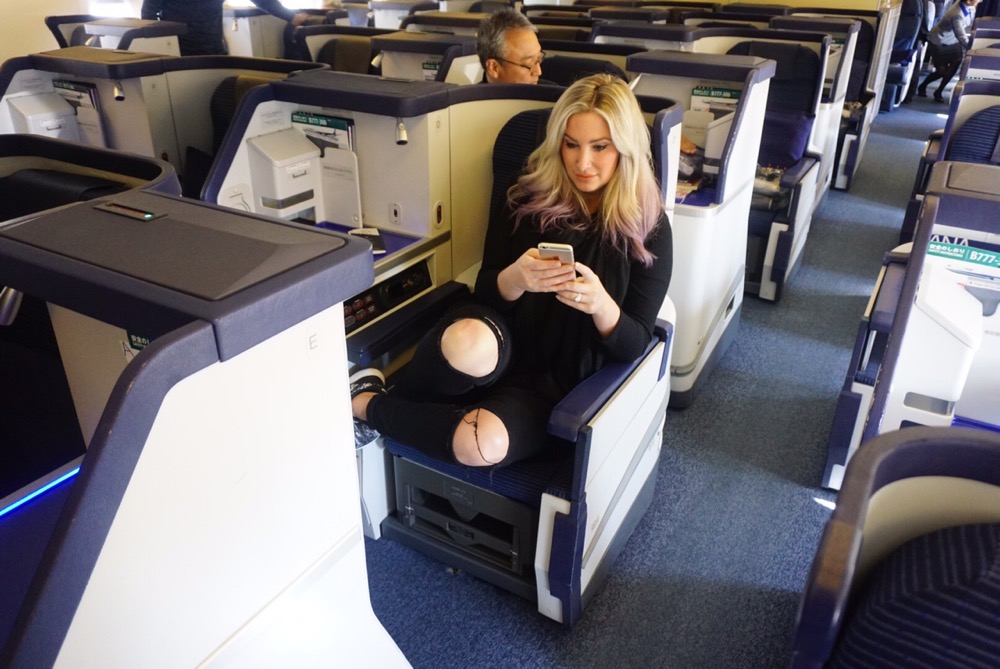 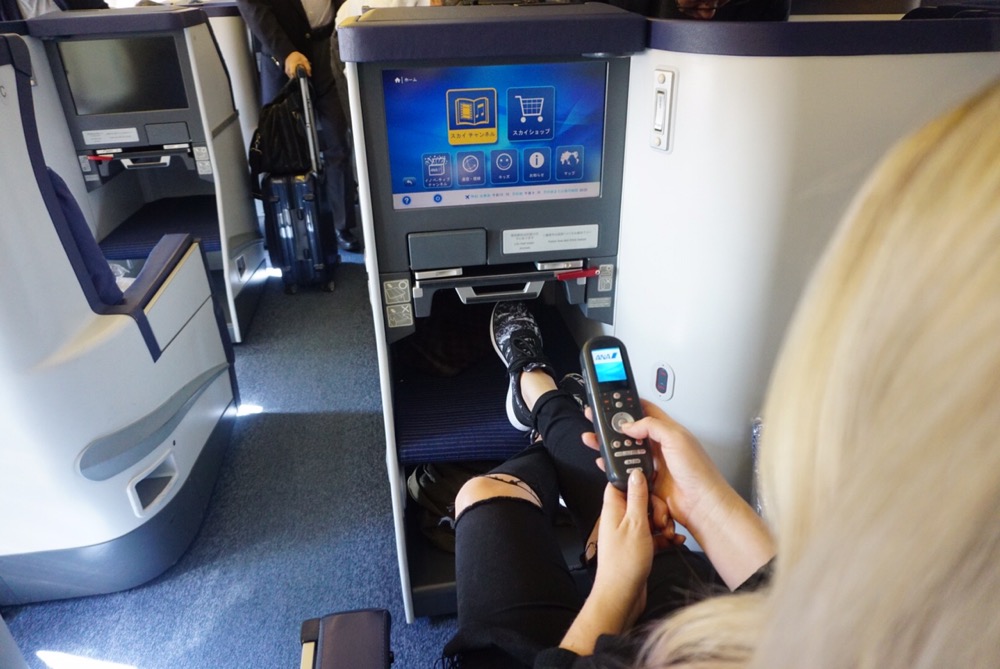 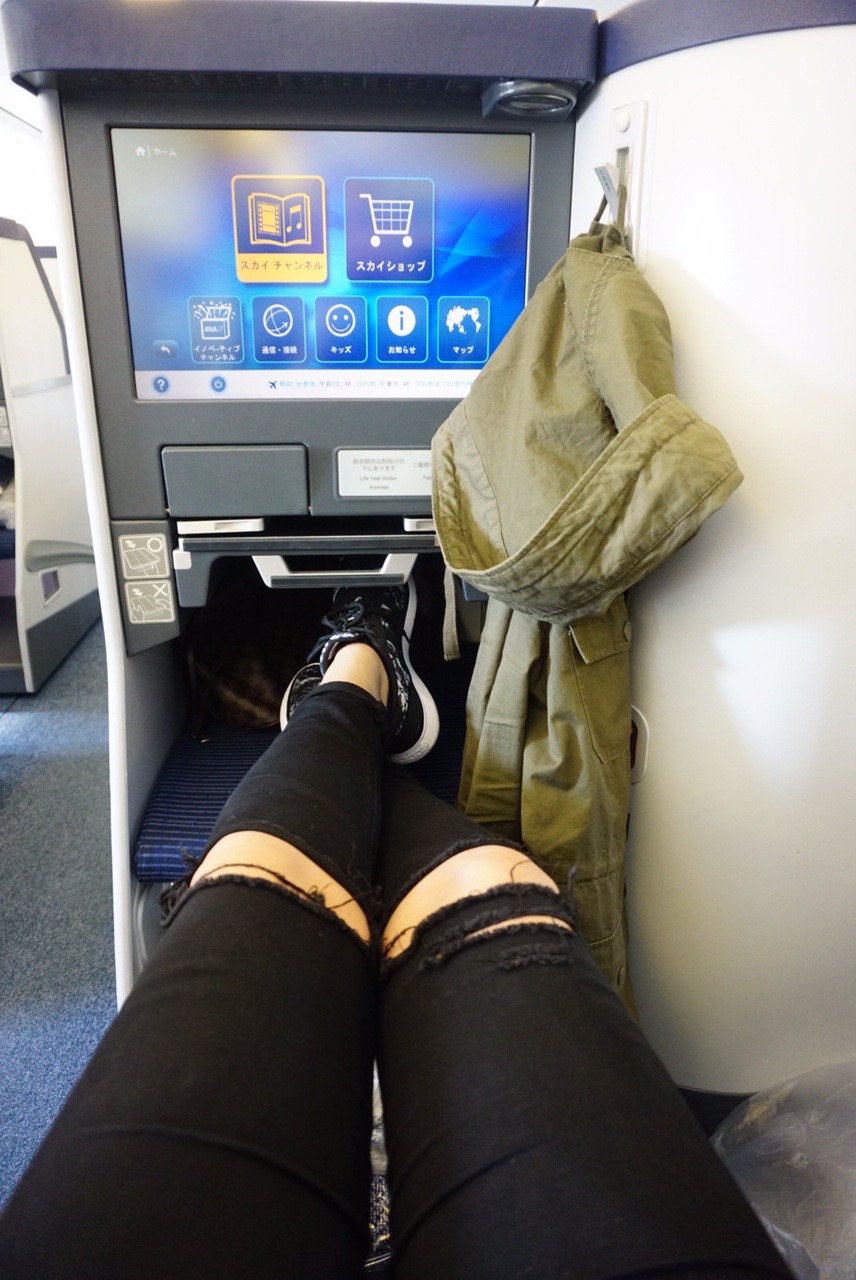 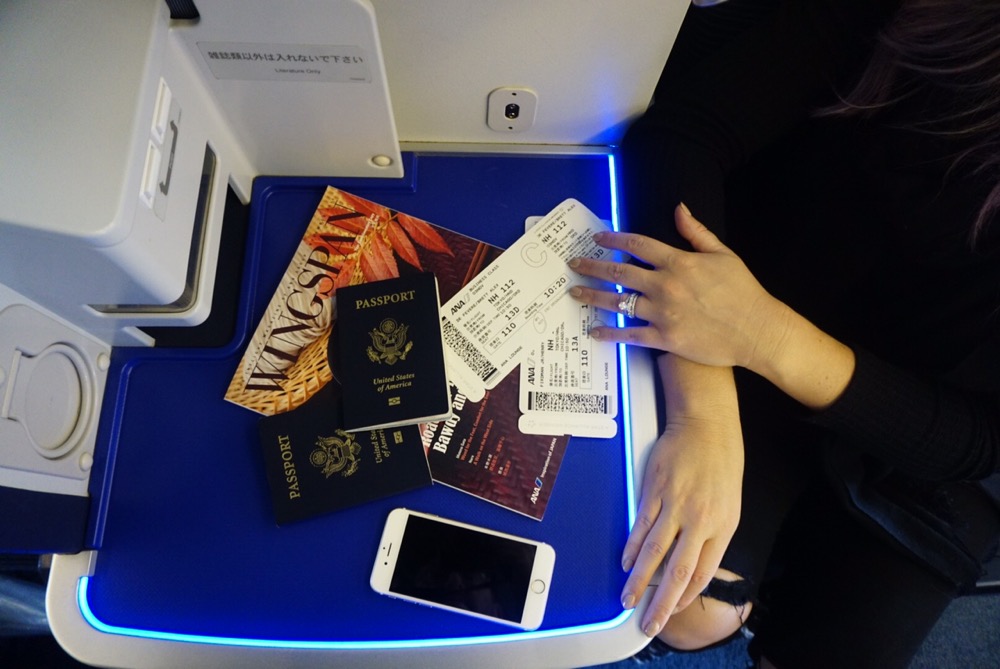 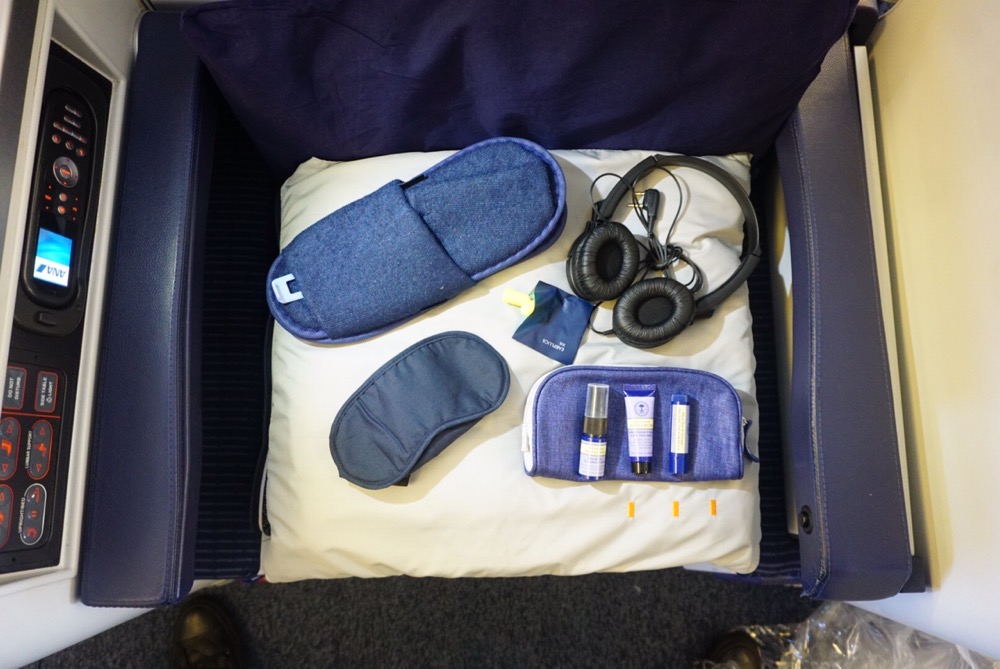 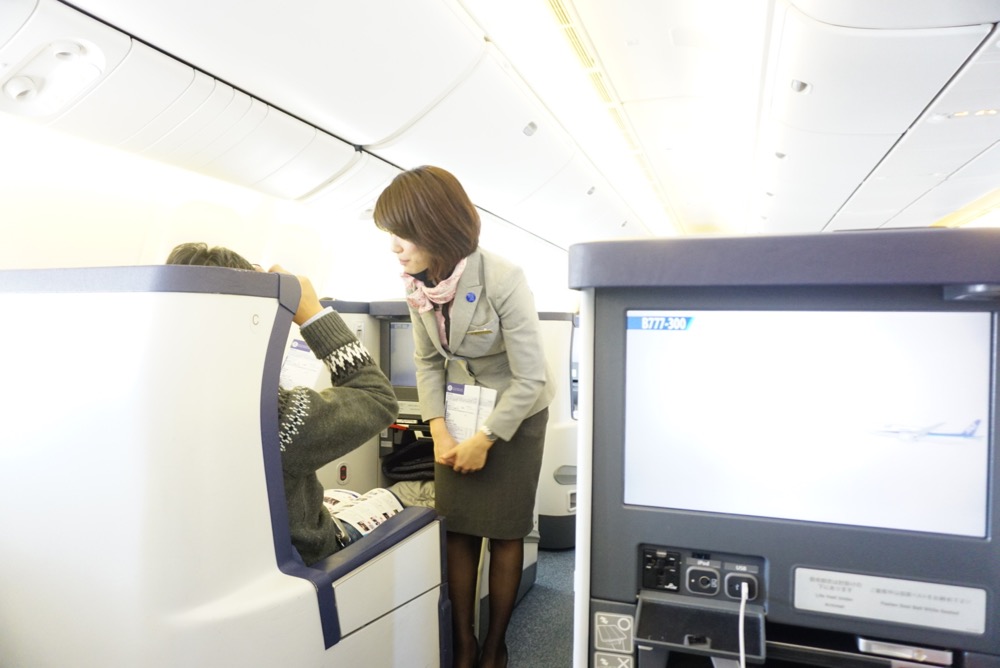 This little “pod home” ensured comfort, entertainment, privacy, and more importantly, sleep, for the next 13 hours of my journey to Tokyo. With a seat that transitions into a lay-flat bed, I was able to catch some much need zzz’s while en route to the Land of the Rising Sun.

But before we snooze, we dine…

Dining in Business Class on ANA is a pretty spectacular event in its own right. ANA partners with esteemed chefs and sommeliers to create a world-class dining experience for their passengers. Their cabin attendants are also put through a rigorous training program that assures each detail and proper service is thoughtfully and carefully carried out.

They kick off the flight with either an International or Japanese four-course meal (your choice), white linens, real flatware, and the finest choices in wine, champagne, spirits, and sake. Sake it to me! You bet I indulged.

And for those not quite satiated after four courses, a full menu is available to order from any time during the flight (think: hot bowls of ramen, American-style cheeseburgers, fruit and cheese plates, ice cream). In a word, yum. 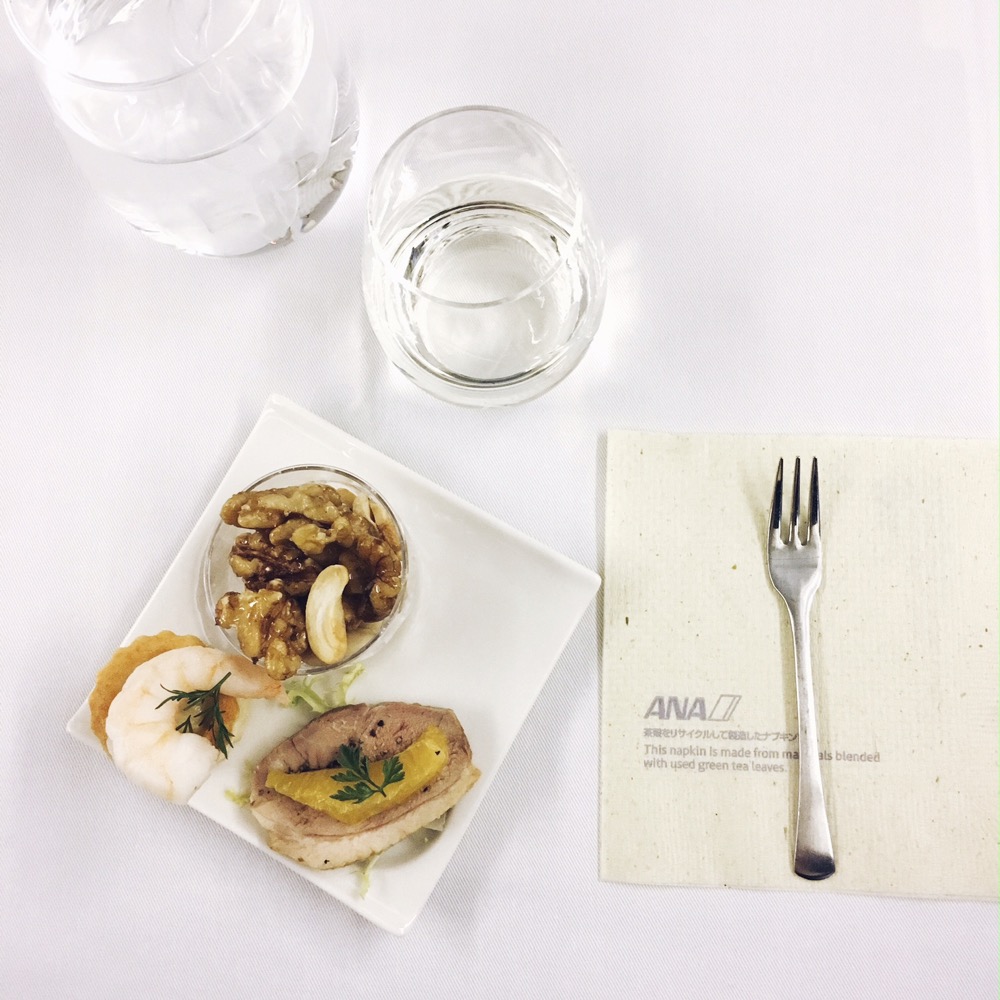 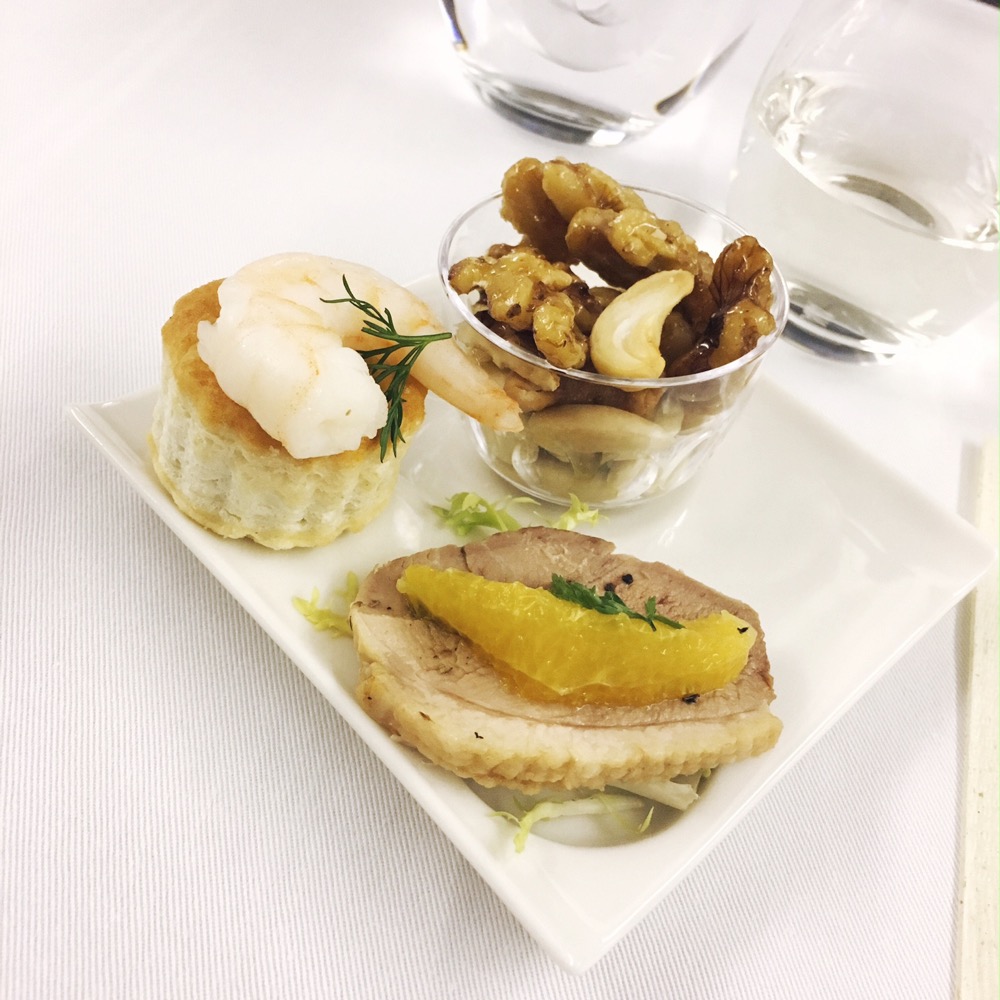 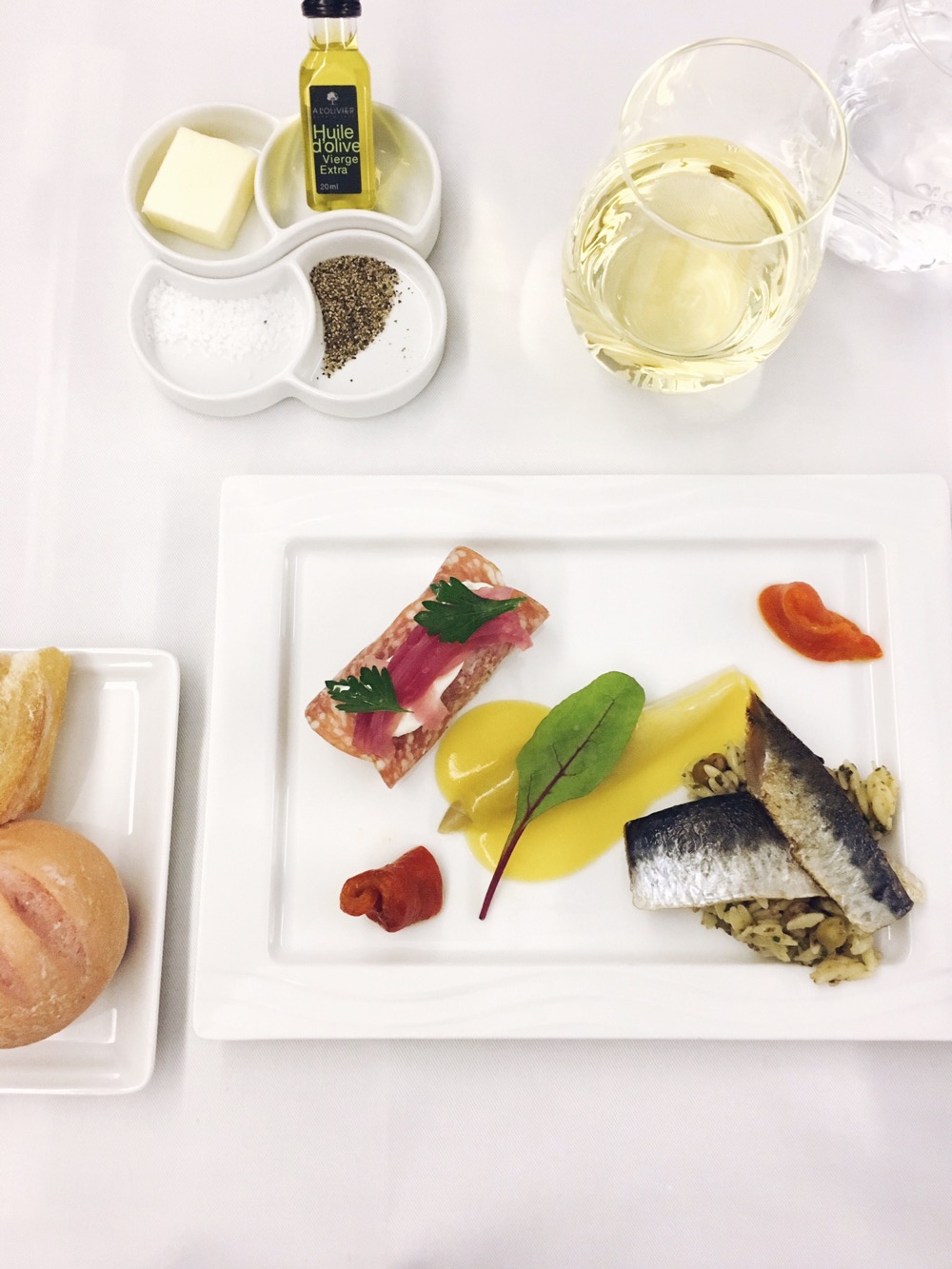 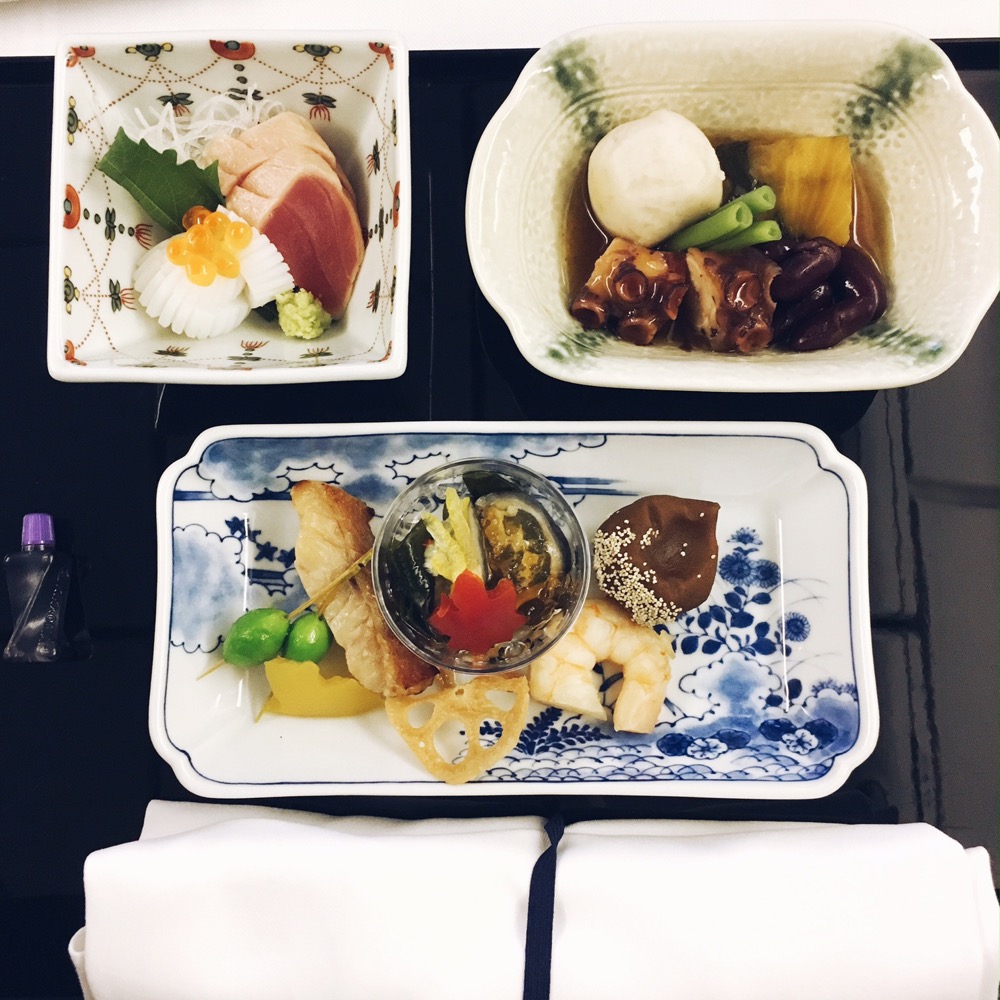 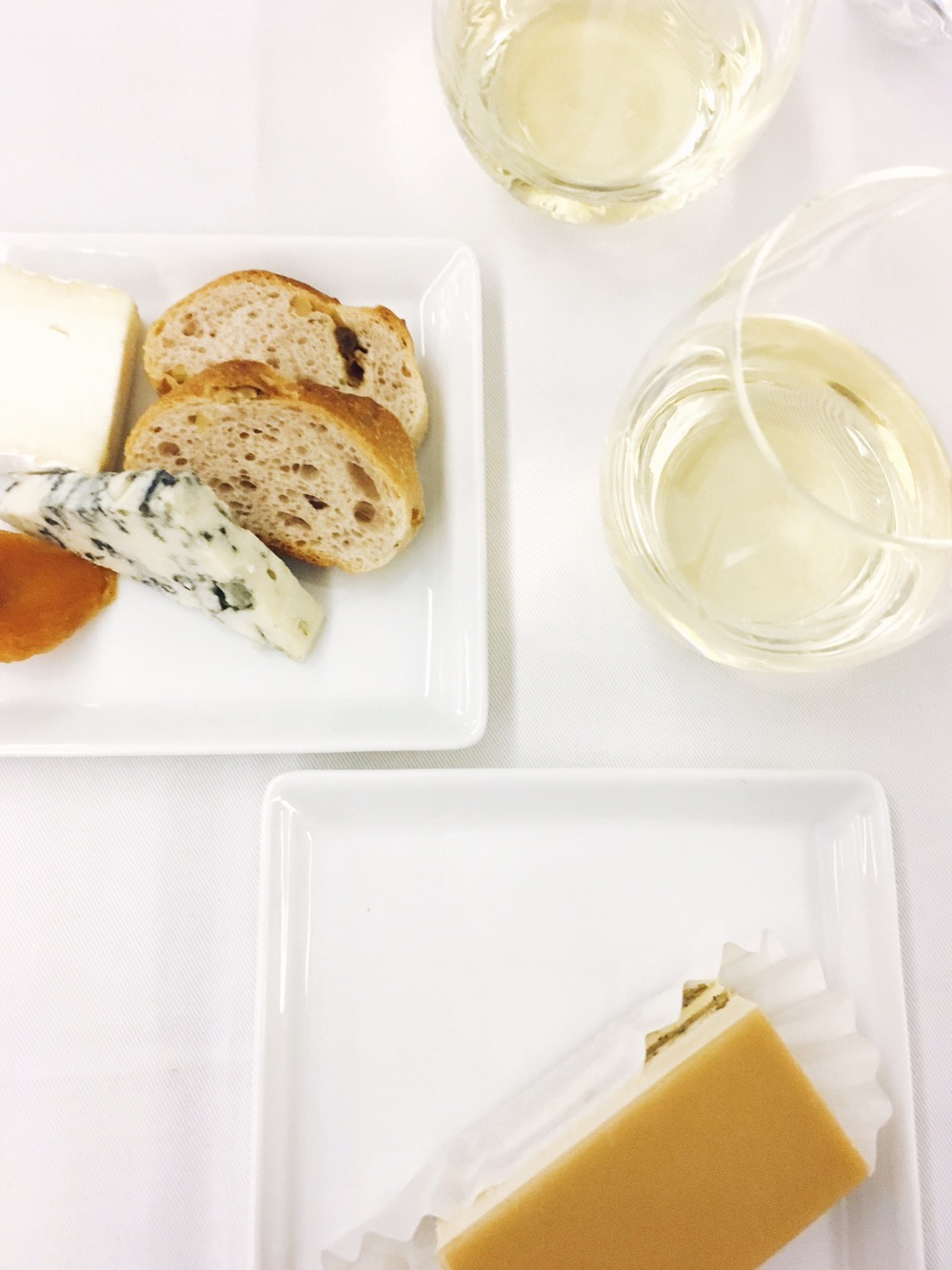 Our time in-flight just breezed by. We were constantly tended to by the staff while awake with hot towels, beverages, meals, and snacks, and then completely left to a quiet time when we were ready for some shut-eye. We were so well looked after, it was almost as though we were on a private plane from somewhere like Jettly. The only difference was all the other people on the plane. Thankfully though, everyone seemed to be on their best behaviour so there are no seat-kicking-kids horror stories. I was shocked at how fast the time went — secretly, I was enjoying my relax in flight so thoroughly, I almost didn’t want to get off the plane. Almost. However, Haneda airport was our final destination and it was time to disembark.

Flying into Haneda (versus Narita) opens up many possibilities that were not previously available to travelers from JFK and O’Hare. For starters, Haneda is significantly closer to the city center of Tokyo. Our drive from the airport to our hotel was a short 30 minutes. For those conducting business, this is far more convenient than ever before and tightens up the time you spend traveling into the city for meetings and events. Haneda also boasts substantially more connectig opportunities within the country. Tokyo to Kyoto, Tokyo to Niigata, you name it, it’s all done out of this modern airport and makes traveling within the country a far easier experience.

Once on the ground in magical Tokyo, the conclusion of our time with ANA was a visit to their global headquarters where we had the opportunity to see the ANA service machine in full force. We sat in on cabin attendant training, rode in a mock Boeing 747 and 787, and interviewed ANA’s Senior Vice President, Mr. Yutaka Ito. Each facet of the business was quite different, however, the message was the same; ANA is the embodiment of culture, class, and hospitality. Everything is done with precision and detail in mind. 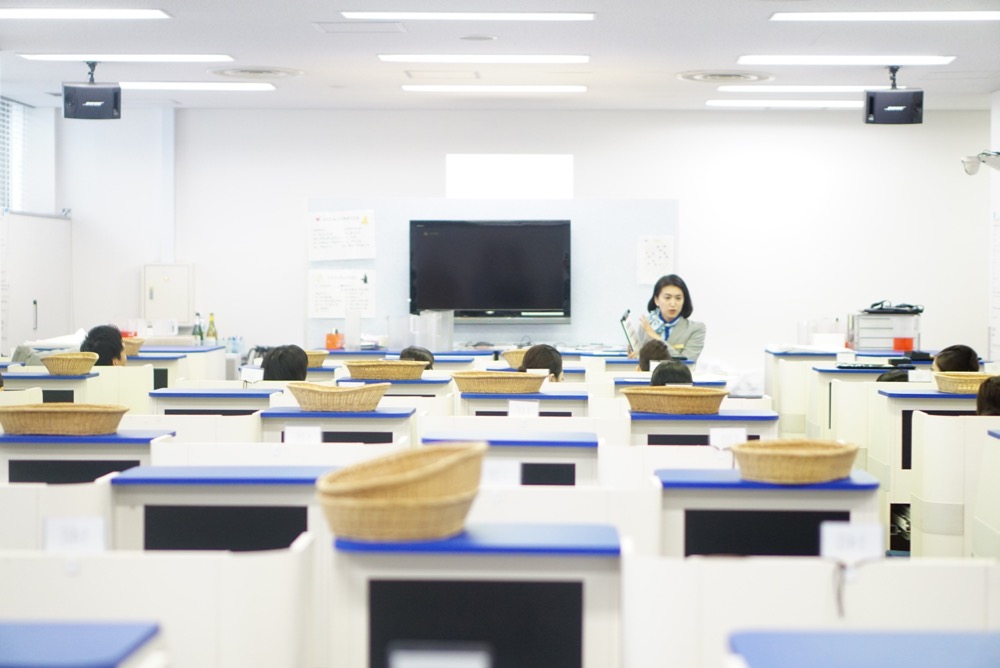 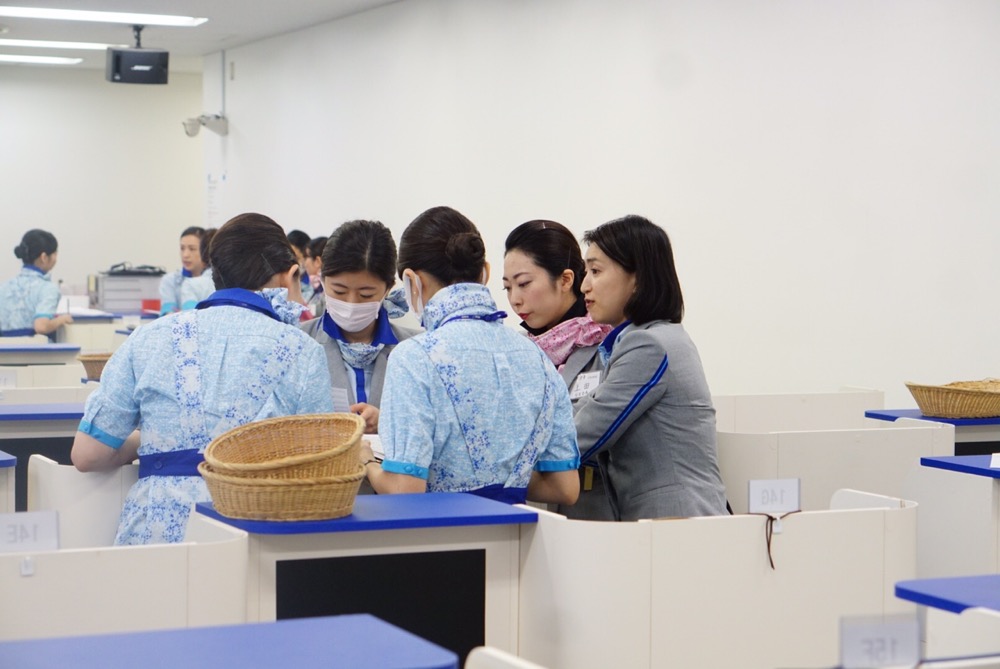 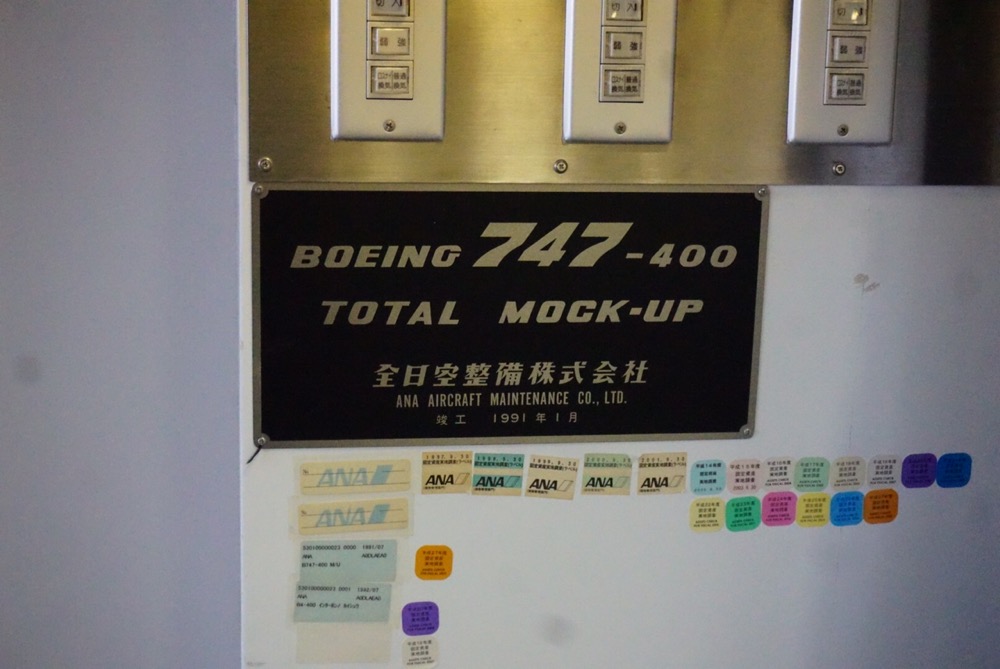 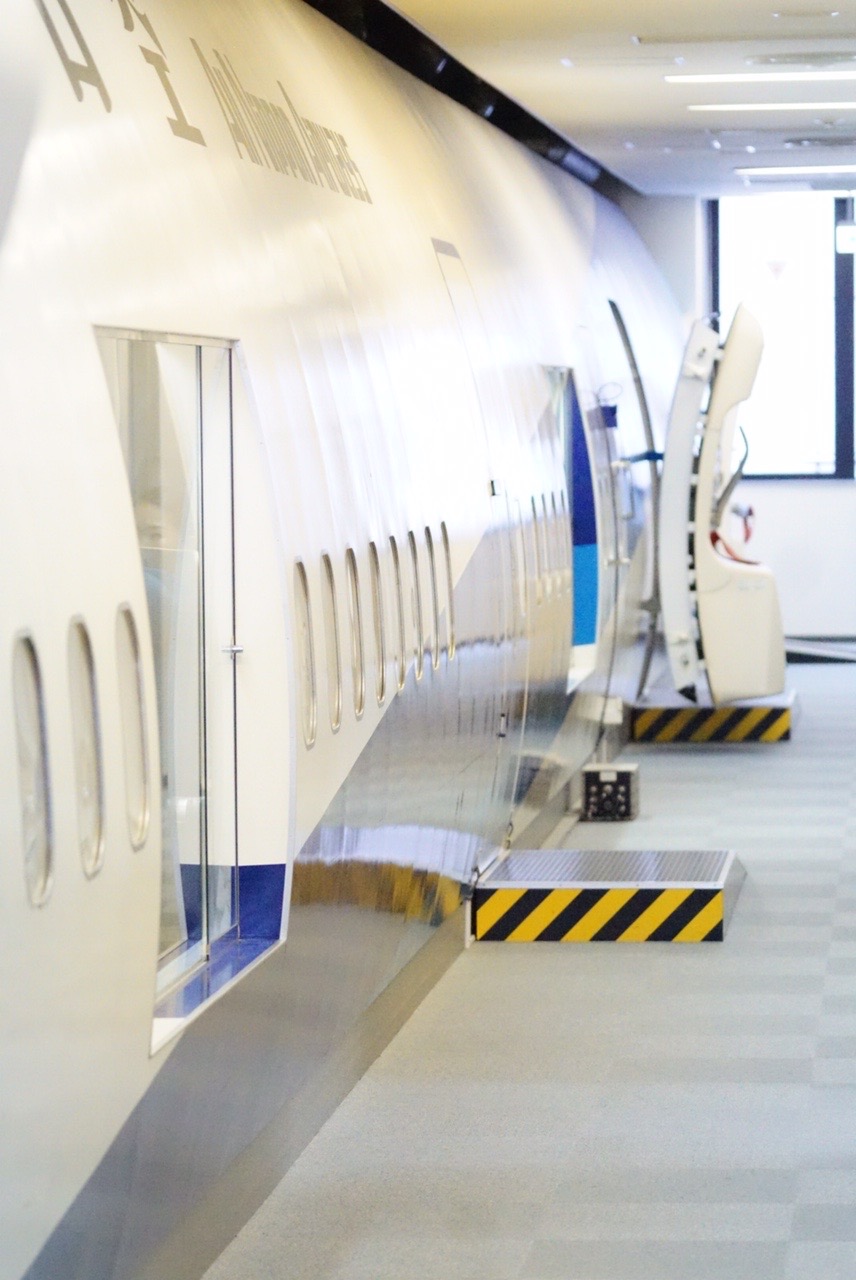 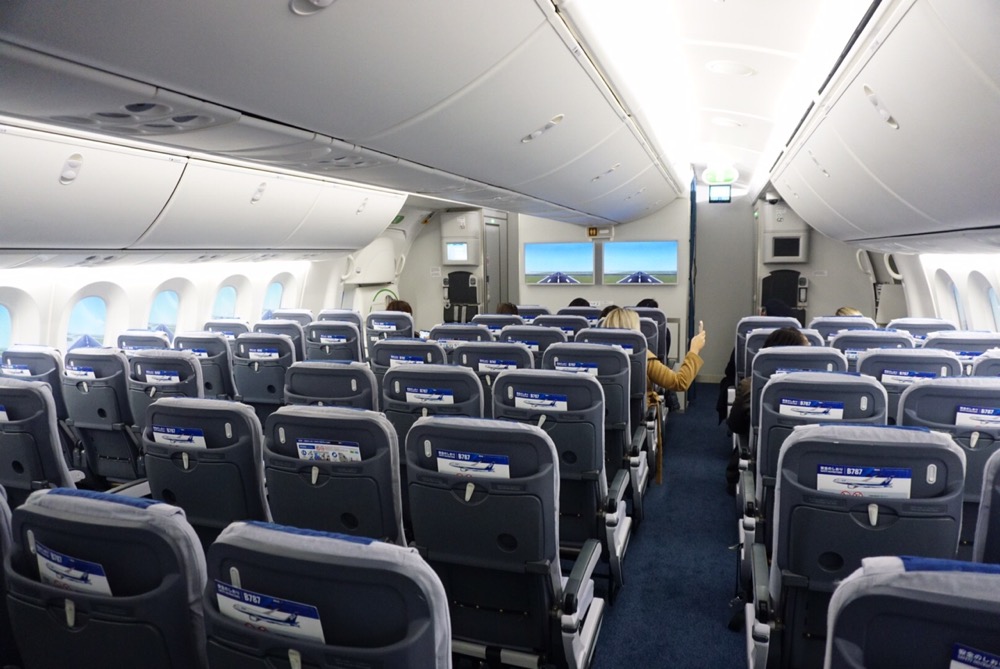 Service and grace in flight. The ANA spirit embodies both – and beyond – not only did they make going to Tokyo a reality, they made travel to and from Tokyo an absolute delight.

View Other Posts In: Travel