When I tell people – especially new moms – that our 3 month old son, Blake, has been sleeping through the night since 7 weeks old, I almost always get the same reaction: a big gasp followed by the ‘ol “OMG, how did you do it?!” question.

There’s no commodity more precious than sleep, particularly for new parents. The hours can be unrelenting and brutal, while the lengths you go to can also get pretty ridiculous and borderline comical. When you hear someone is sleeping through the night and you’re not, you want to know their secrets immediately. 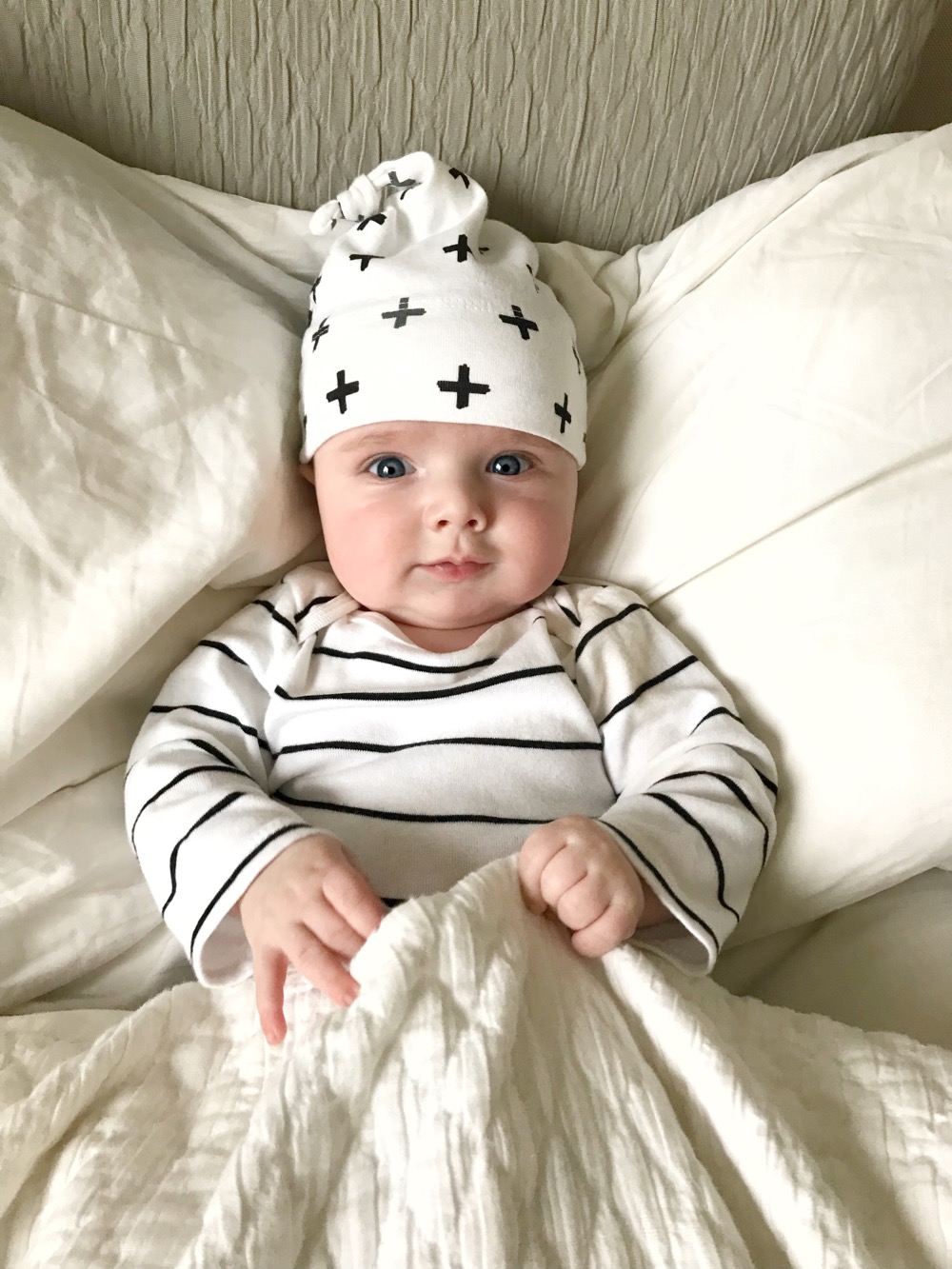 I remember this one night when Blake was 2 weeks old with distinct clarity… we had just fed him, swaddled him, and put him down to sleep only to have him wake up 20 minutes later in a complete rage. We picked him up out of his bassinet and starting walking him around the house, lulling him back to sleep and putting him back in the bassinet, only for it to happen again 20 minutes later. This cycle went on for hours. We were ready to pull out our hair and had NO IDEA WHAT TO DO to keep this baby asleep. My husband, Eric, finally took him into his nursery and put him in his swing where he started to drift off to sleep… but now what? He’s only two weeks old, we can’t just leave him in here alone, right? Do we carry the swing back into our bedroom? Do we try to transfer him back to the bassinet? Ummm… no to all of that. So, Eric curled up at the base of his swing on the floor and slept there the remainder of the night while Blake swung in peaceful oblivion.

This was not going to work longterm.

After that night, we decided something needed to change and started doing a bunch of research on sleep training a newborn (could it be done?) and found out that we were doing pretty much everything wrong. Helloooo, new parents!

With a few helpful tricks, and a willing newborn, we started a routine to set Blake up for successful sleeping and within a matter of weeks we had a baby that was sleeping through the night. Hallelujah! 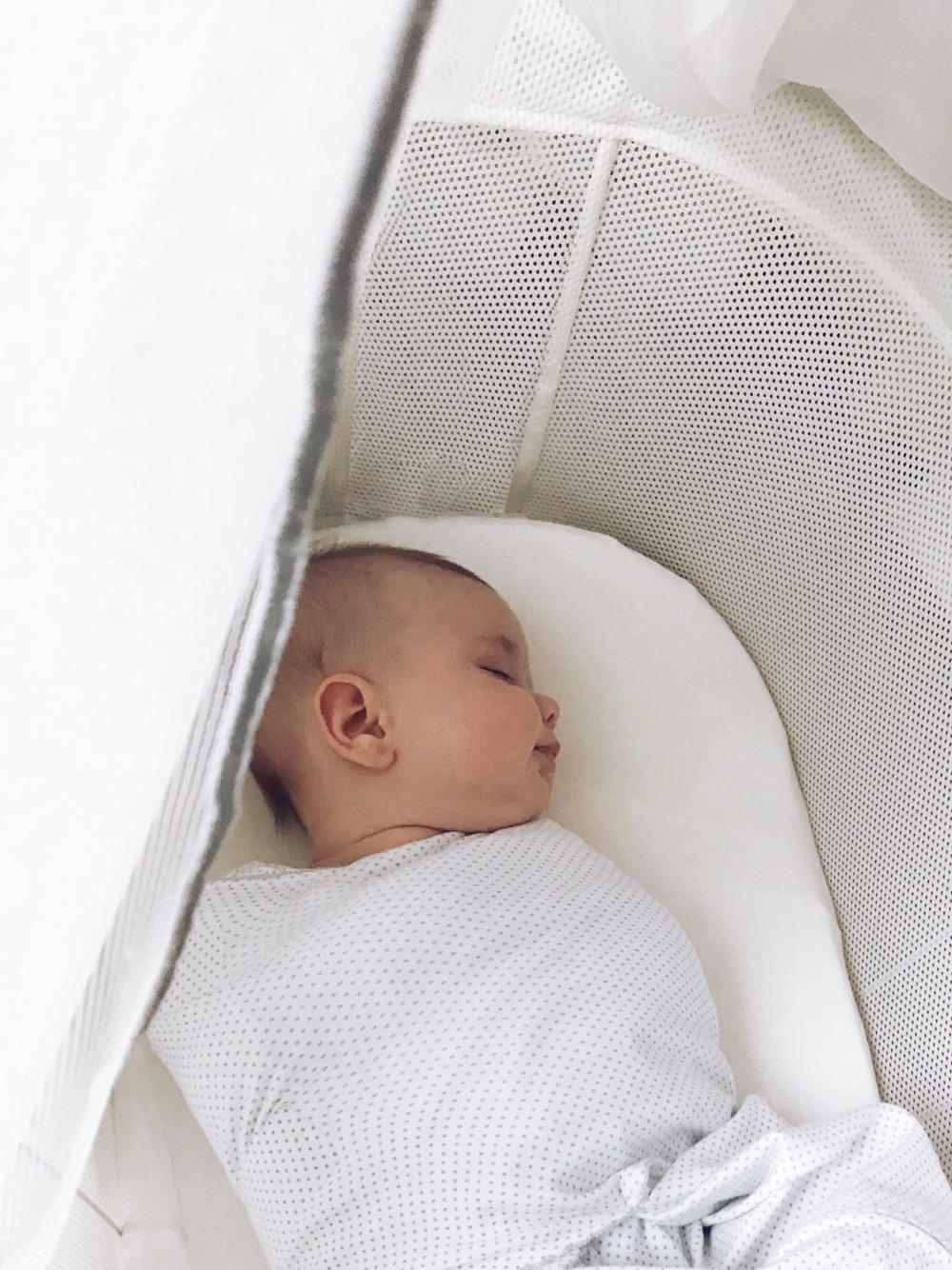 Now, I say a ‘willing newborn’ because I truly do believe that is at least half of the equation. Personality does factor into this. Some babies just will not sleep through the night in their early stages no matter what you do. You can do everything right and if it’s just not who the baby is, it won’t happen. With keeping that in mind, this is just what worked for us – and for Blake – so I wanted to share in the hopes that it might help you, too, but if it doesn’t, don’t fret. I promise, you’ll get there and you will sleep again.

Tip One | Differentiate Between Night and Day

This was an important tip, and something we were not doing initially. When we would put Blake down for a nap during the day, we’d put him in a quiet room, draw the curtains closed and put his noise machine on. It was pretty much the identical routine we were doing in the evenings and didn’t allow for any difference in signals to Blake. It all felt the same whether it was night or day. To get him used to the difference between nighttime routine and daytime naps, we would keep the room light during the day, have him sleep a variety of places (Swing, DockATot, Bassinet), and not minimize external sounds (tv’s were kept on, voices were at normal level, etc.). It wasn’t until the night time that we would drastically change the feel of his routine.

Even though Blake was nursing, we did make the choice to give him a pumped bottle of breast milk before bed to be sure he was full before sleep. I would nurse him for about 10 minutes first (it’s so soothing for them) and then switch him to the bottle so I could see exactly how much he was getting before bed. This was a personal decision, of course, and I know some mommy’s don’t want to pump. This was just what worked for us, but I knew that a full baby was a sleepy baby, so I went this route for my own peace of mind.

After feeding, we changed his diaper and dressed him in a zip-up sleepsuit (do NOT buy anything with snaps for nighttime wear, trust me, I learned this the hard way). My favorites are the Cloud Island footed play set pajamas from Target as well as the Burt’s Bees organic cotton footed pajamas. Your baby will live in these easy, soft pieces! 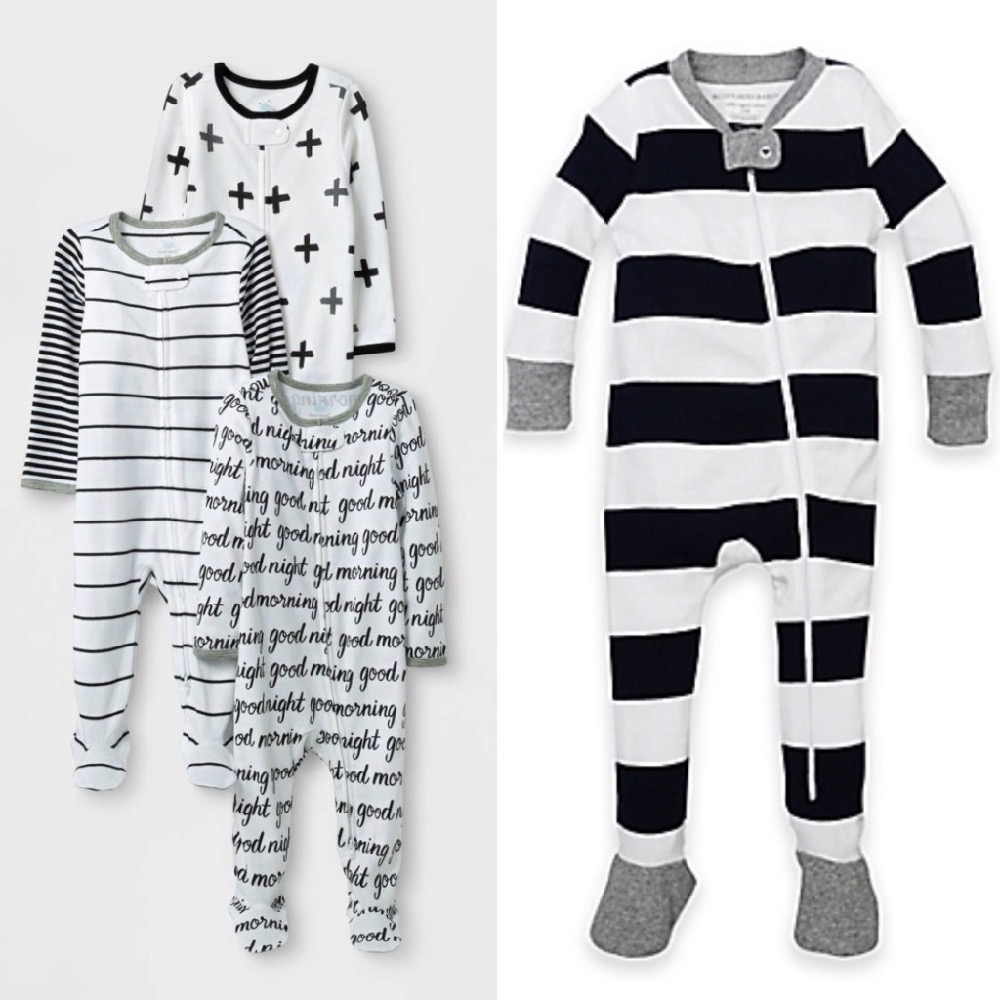 Now you’re ready to swaddle. Most babies love a good, tight swaddle, so don’t be afraid to really wrap them up like the little burritos they want to be! They were super bunched up in your womb and this gives them the feeling of security and minimizes their startle reflex which is another cause of wake-ups. Our guy was a big fan of the arms down swaddle and we started initially swaddling with the Aden + Anais swaddle blankets and then switched to the velcro Halo SleepSack once Blake started getting bigger and breaking out of the blanket swaddle. Oh hey, Houdini!

Once baby is swaddled up, you’re ready to soothe baby to sleep in a pre-set up room.

Tip Three | Setting up the Room

About 10-15 minutes before you’re going to put down baby down for bed, get the room ready. Whether baby is sleeping in their own nursery or co-sleeping with you, the room should always be the same when you bring baby in for their nighttime routine to signal “ok, little one, it’s sleeping time now.” These repetitive routines work wonders and over time the routine should get easier with each step getting shorter and faster. 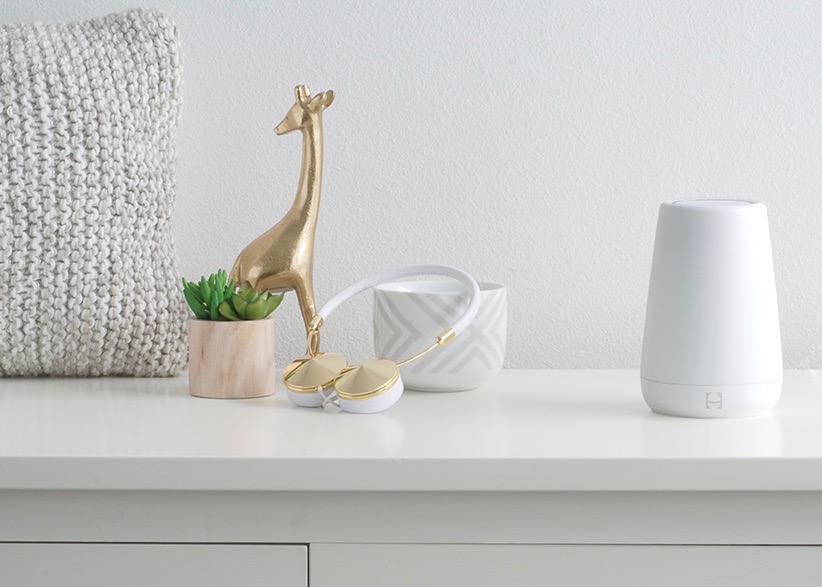 Turn off the lights and switch on a dim nightlight. Turn on sound machine (we like the Hatch Baby Rest Sound Machine which doubles as a nightlight, too), and soothe baby to sleep in your arms. If baby takes a pacifier, this is a great time to introduce it. Once baby is asleep for several minutes, gently place to sleep and keep the room consistently in this dim, white noise state.

Tip Four | What if Baby Wakes Up

Just be ready for it because it’s going to happen. The baby will wake up. For starters, newborns NEED to wake up to eat, be changed, etc. The goal is not to skip necessary feeds or changes, but to gently train baby to go to sleep easily, stay asleep as long as possible, and go back down easily and without much drama. So, when feedings and changings do arise, be sure you’re doing the following:

Now, what if baby won’t go to sleep, or has just been fed, and changed, but wakes up anyway? Here’s where the training kicks in!

Step one is do not take the baby out of the bassinet or crib. I know, it’s hard, but resist the urge. This was our biggest mistake in the early days and led to the nights that had the least amount of sleep. Try these steps first. If after 15 minutes, and repeating these, it’s still not working, go for it and get that little nugget into your arms and check for changing/feeding needs and cues.

Now at three months, Blake continues to sleep through the night with the occasional wakeup that is typically solved but just popping his paci in his mouth and letting him self-soothe back to sleep. We do still co-sleep with him in our room, which I do think is a factor that helps as well.

The routine takes about 10-15 minutes overall now and he falls asleep super quickly and easily which I really believe is because he knows the drill now and what to expect. 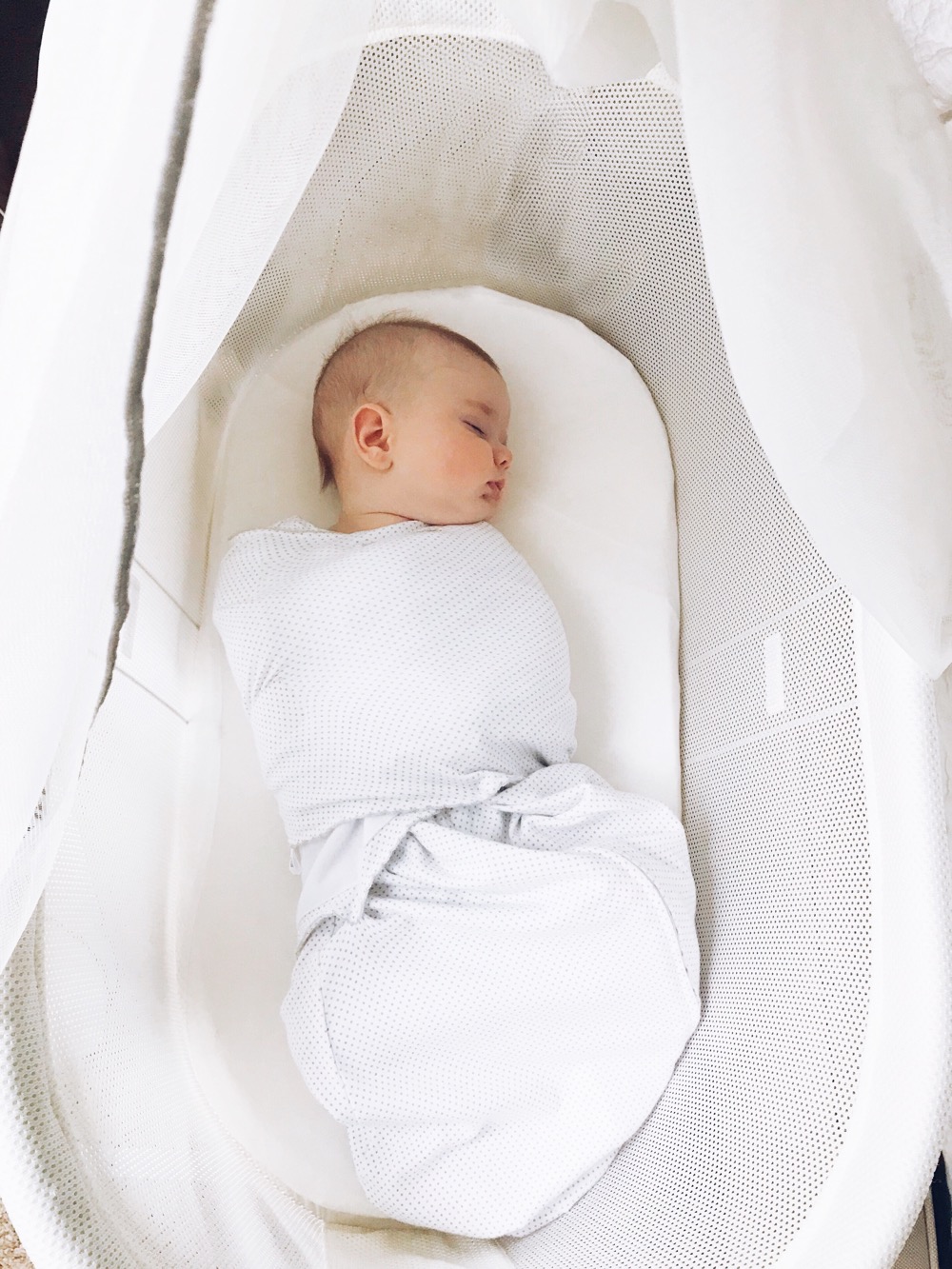 I hope this helps some of the new moms and dads out there! If you have any questions or tips to add, please leave them in the comments below.

11 thoughts on “Sleeping Through the Night: Blake’s Bedtime Routine”